Is the Fear of Failure Holding You Back from Achieving Success?

Trying something new always comes with certain risks and challenges. When you choose to take a shot at something, you never truly know if you will succeed in accomplishing it or not. The risk of failure always accompanies the possibility of success. A lot of people are scared of feeling shame, ridicule, and disappointment that comes with not accomplishing what you were aiming for. The only worse than failure is never really trying in the first place.

Success is not the product of luck. Success is the result of perseverance in the face of impossible odds, innovation in front of unprecedented events, and unity in the form of teamwork. Success is continuing to challenge your capabilities, adapt to circumstances, and transform your mindset. However, if you are never willing to take that risk, you will never know what you are capable of and what you can overcome.

Here are some examples of historical figures who faced dire circumstances and constant failure, yet still managed to keep trying until they figured out a way to succeed. These figures are now renowned for their contributions to history as a result of their immense hard work and perseverance.

If we had to form a list of the most famous home run hitters by exploring the history of baseball, Babe Ruth will fall pretty high on it. In 1935, Ruth sealed his career and a count of the total home runs he had hit during his career was conducted. According to this count, the baseball legend has a total of 714 home runs making him a record player until 1974. His record was broken 41 years later by Hank Aaron who scored his 715th home run and replaced Babe Ruth as the player having the most home runs.

What’s interesting is that Babe Ruth had twice the number of strikeouts as home runs in his career. Numerically, he had 1330 career strikeouts which are hard to believe for someone who is known as a baseball legend. According to Ruth, “Every strikeout brings me closer to the next home run.” and it turned out to be true.

We are all familiar with Kentucky Fried Chicken or KFC. What few know is that the picture of the old man on the KFC logo is actually Harlan Sanders or Colonel Sanders, the founder of the famous fast-food chain. But KFC didn’t hit it off overnight. Sanders’ chicken recipe was rejected 1009 times before he eventually partnered with a Utah restaurant owner and launched the first KFC restaurant in 1952. The fast-food chain expanded to cover all of the U.S. and Canada by the 1960s.

Anybody who is even remotely familiar with science knows who Albert Einstein is. Known as one of the most brilliant scientists of all time, Einstein is a name that rings of genius. His popularity and priceless contributions to science are why it is exceptionally surprising that he faced academic and mental difficulties as a child. Einstein did not learn to speak until he was four years old and didn’t read until he was seven. He faced academic challenges of a magnitude that led one of his teachers to describe him as “mentally slow”. Later in life, the same person won a Nobel prize in physics and formulated the theory of relativity.

Founder of the Ford Motor Company, Henry Ford gained popularity due to his contributions in developing and manufacturing motors with incredible creativity as well as introducing the idea of the assembly line. In his life, Henry Ford received immense appreciation and success owing to his innovations in motor manufacturing. However, Ford faced tremendous difficulties in his previous attempts to launch a business which led him to be broke about five times before his career skyrocketed with the business of manufacturing cars.

If you are familiar with literature at all, you are bound to know John Grisham. One of the most popular authors of this era, John Grisham has written numerous best-selling novels often centering around a thriller or mystery, or crime. A lot of these movies have been adapted as movies on the big screen. The beginning of his career was not as easy though. A Time to Kill was Grisham’s debut novel and was rejected by 28 different publishers. Eventually, one of the publishers decided to publish his first book with 5,000 copies. What began with 5,000 copies is now a whopping 250 million copies of his books worldwide.

Sylvester Stallone is an American actor, director, screenwriter, and producer who came to New York in 1969 to start his career as an actor. The Rocky star was not immediately a hit in Hollywood. Instead, it took him years and years as a struggling artist before he finally got his breakthrough. Stripped out of money. Stallone had to put his dog up for sale for $25 to pay off his electricity bills; Around two weeks after this, he started writing a script for his famous movie Rocky and started his struggle to secure a deal for a movie.

His struggles were only beginning here as he got rejected 1,500 times until he was finally offered $125,000 for his script of Rocky by the Union Artists. The downside was that they were not up for casting Stallone in the movie which Stallone refused to accept. Union Artists gauged the worth of the Rocky script and decided to first up the offer to $250,000 and then to $350,000. Stallone rejected all these offers as they didn’t allow him to act in the movie.

Eventually, another deal came through that offered only $35,000 and a percentage of the profits and allowed Stallone to star in it which he accepted. The original movie went on to gross over $200 million. The entire movie franchise has now grossed $1 billion to date.

All these accomplished figures did not succeed overnight. They struggled, failed, got up again, and persevered against impossible odds. When you feel like giving up or scared to try, think of all these incredible celebrities and what they achieved by taking the risk of failure. Embrace the risk of failure because, without it, there is no possibility for success.

MCA is a third-party debt collection agency that has been in constant business since 1950. We are rated A+ with the Better Business Bureau and we pride ourselves on excellent customer service along with delivering great recovery rates. There is no cost to you unless we collect it! Why not try and re-coop some of your past due accounts with no out-of-pocket expense?

Julie is an accounts receivable expert with over 32 years of experience. She has a Bachelor's degree in management information systems from St Louis University and has worked her way up from data entry to management. This allowed her to know and learn all aspects of the collection industry. 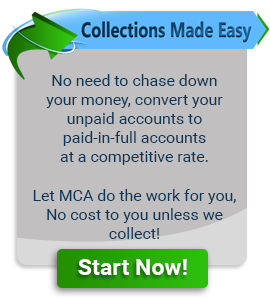